Europe is a utopia. With its name we often associate cultural, historic, and humanistic values, rule of law, appreciation and importance of quality life. The road to Europe is an imaginary road to a better tomorrow and happier future. However, that future cannot be seen on the horizon.
The European reality indeed is something else, but we couldn’t care less about it. Even though our geographical and cultural identity is unmistakably European, we remain on the outside of the European political and ideological borders. Not unlike those who fail to live up to the standards or satisfy the criteria, and who don’t meet the specifications, we perceive Europe as the primary goal, desperately striving to achieve it. Despite this, we tend to see Europe with too critical an eye, and begin to be more judgmental of it than of ourselves. At the same time, we want to be an equal part of Europe, but we are not doing enough to change the circumstances at home. Our desire to join the European Union and live according to its standards thus ceases to be a joint effort and becomes a personal, fascinating quest for life in one of the EU countries. But, we would be better off if Europe just conquered us, that is, put things in order or destroyed us.
While trying to rid ourselves of the last remnants of our Yugoslav identity, we simply overlook the generation that is yet to settle the score after the breakup of Yugoslavia – the generation that lost its country and its identity with it. We also tend to forget those who found their home in these new national, or, more precisely, nationalistic countries. With the breakup of Yugoslavia, they just went to their homes. The young generation, most of them born during the war, is now nearing its political maturity. In the search of its own identity, the new, post-Yugoslav generation has been frantically and mindlessly embracing nationalism as if it were a religious sect. The history is beyond forgiveness.
Gone is the idea of a safe consumer society. A flood of refugees challenges the values upon which the European politics, culture and lifestyle are based on. Islam becomes more and more popular. Of course, Christians are also standing their ground. The foundations of a country as a secular entity have been shaken to the core. And let’s not forget the money. Banks will do their thing. The left and liberals, as well as open societies, hypocritically tolerate the emerging right traditionalism, hoping it will do the trick. Even the oppressor wants his human rights protected. Religion is taking its toll.
From the perspective of complete outsiders, some of us secretly desire that the global political changes will bring about the breakup of the European Union, in a similar fashion they brought about the breakup of Yugoslavia in the ninety eighties. Europe will not break up. It may transform and reshape itself, embracing new, not necessarily positive values. The far right sees the settlement of Europe by non-Europeans as an assault on European identity. Fear. Radical actions. Terror. Defense.
Questionable is the desire for integration, as is the possibility of such a community to succeed. The rules are clear. If you live here, you live by our laws. The rules are not clear. There is no integration. There is only assimilation or failure. Life changes…and the world does, too.
The play is based on three essays by Laszlo Vegel, collectively published under the title Stories from the Lower Areas, as well as on the exercises and improvisations the actors had thought out within the theatrical process. Theater is above all fun. The knowledge of a self. What is Europe is a question. What is Europe is an answer. There is no ultimate victory. The unburied corpse of Yugoslavia is staring at us folks populating the border areas of the Barbaricum. 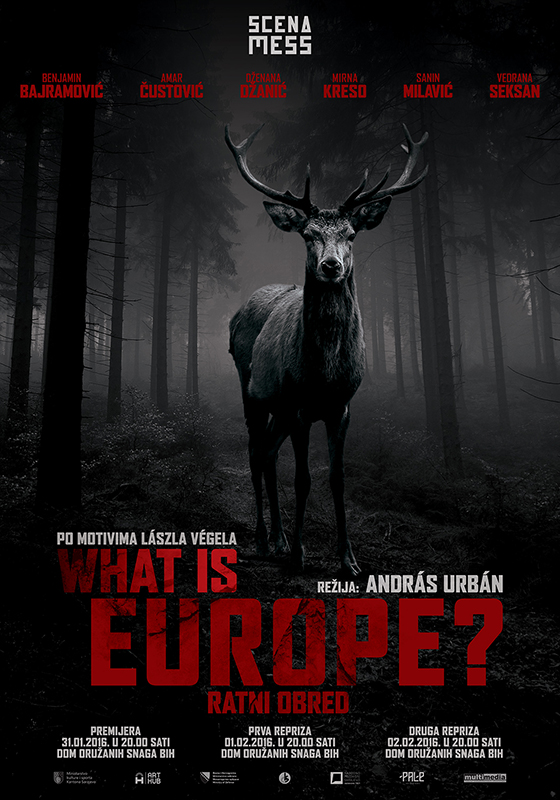 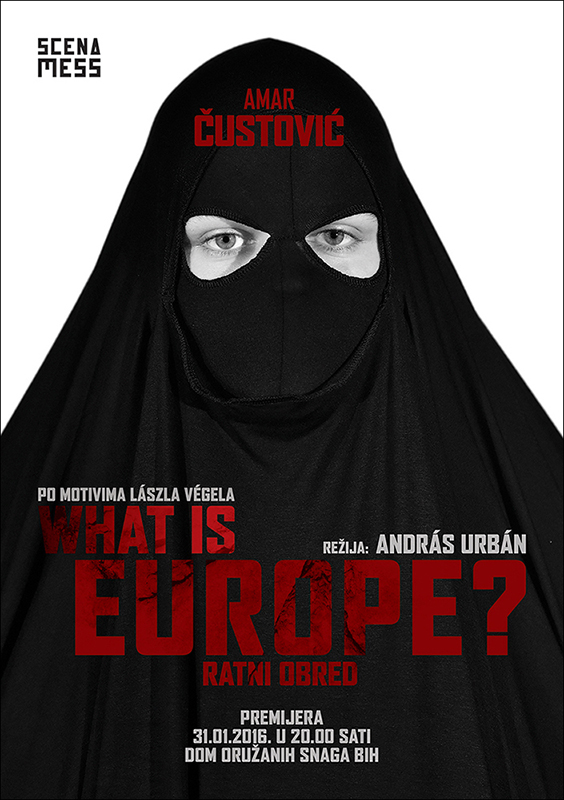 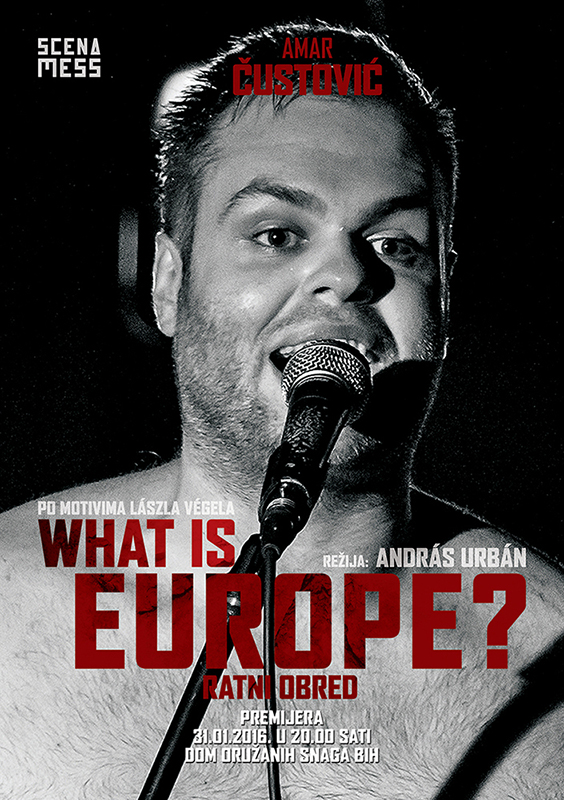 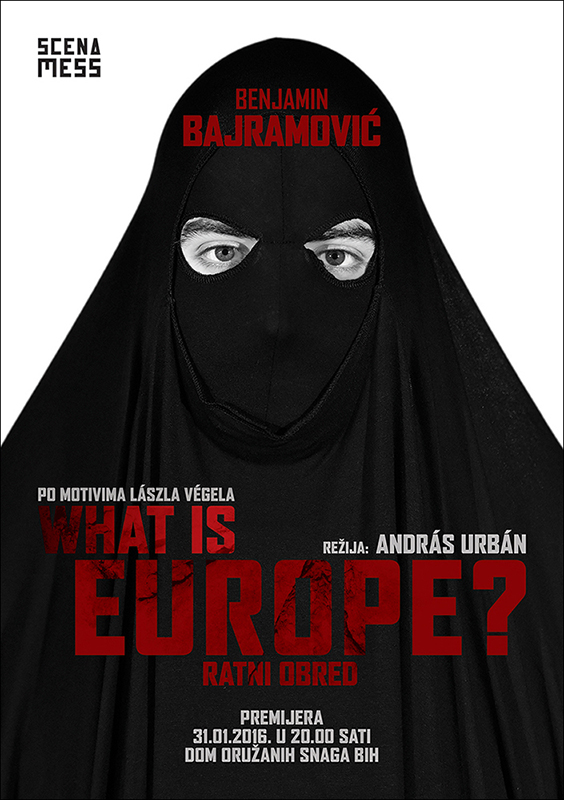 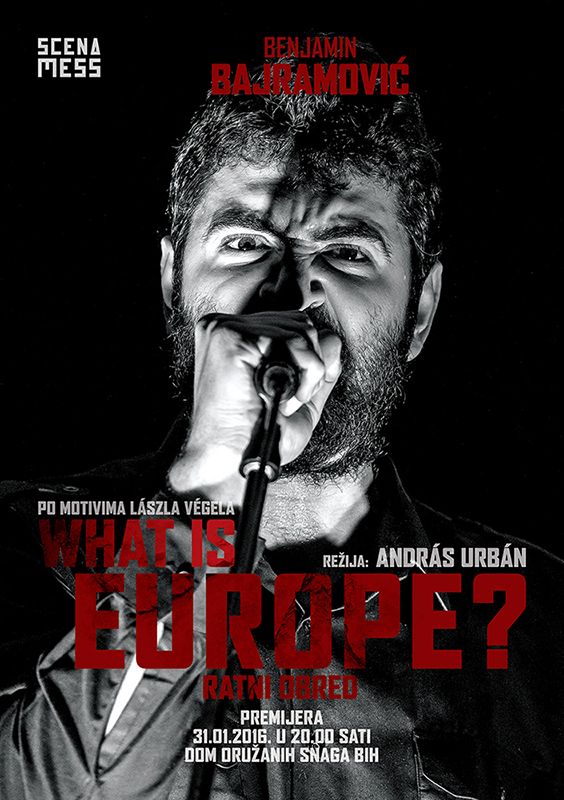 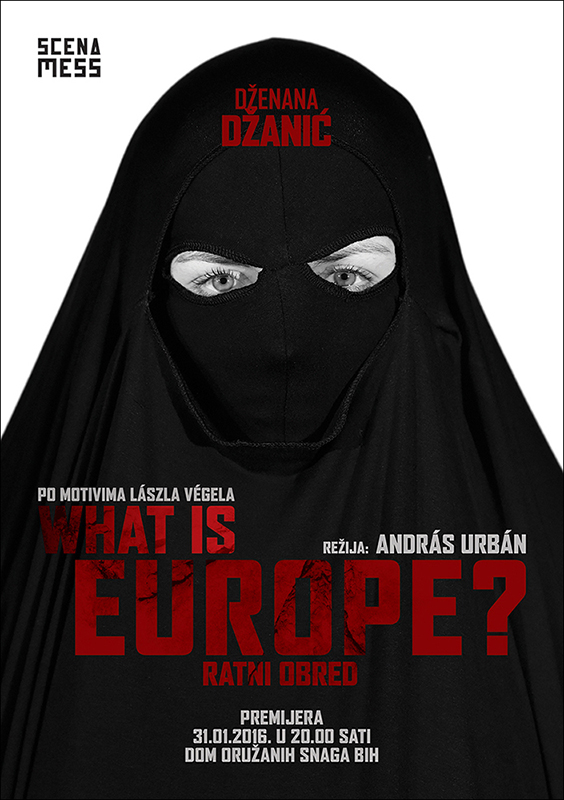 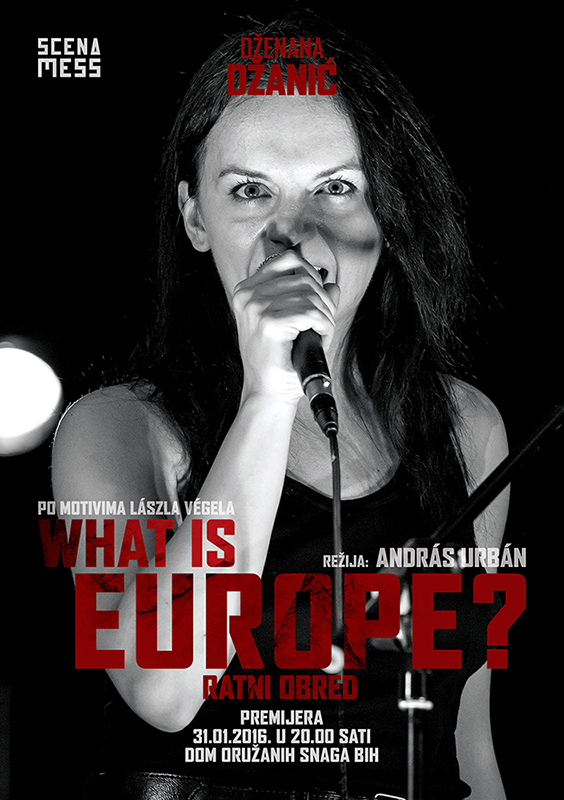 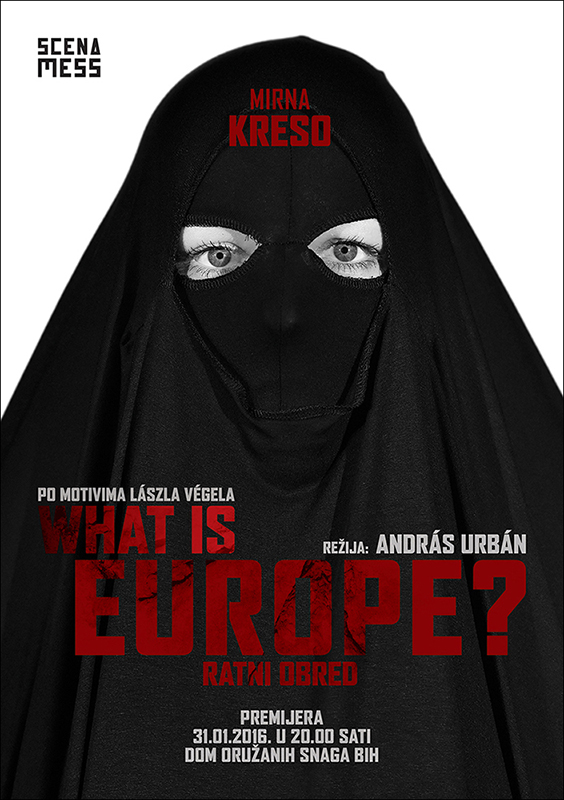 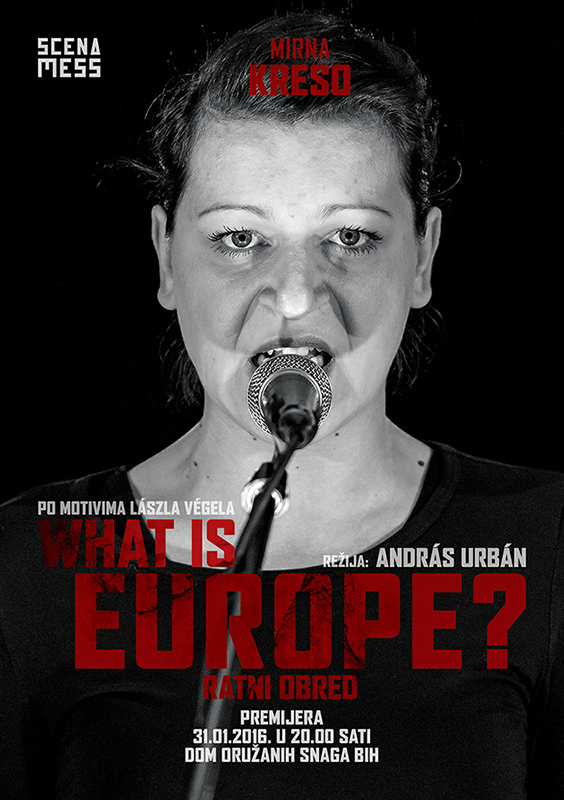 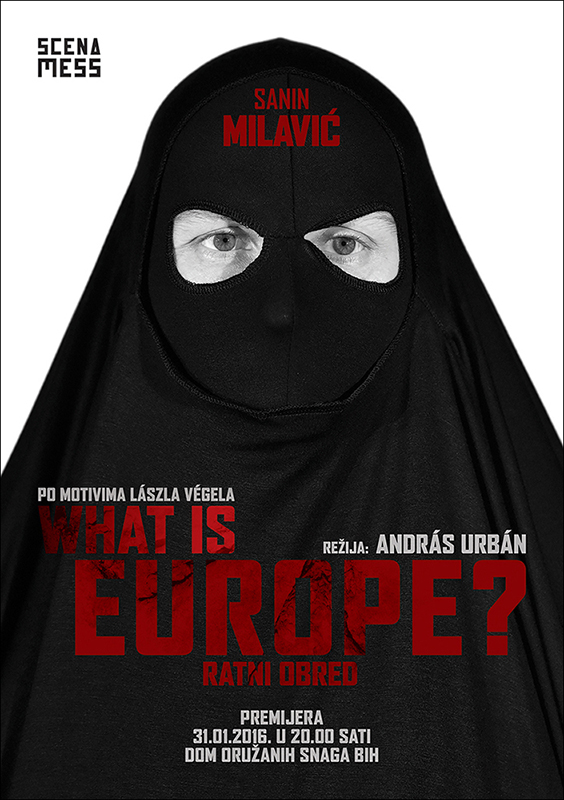 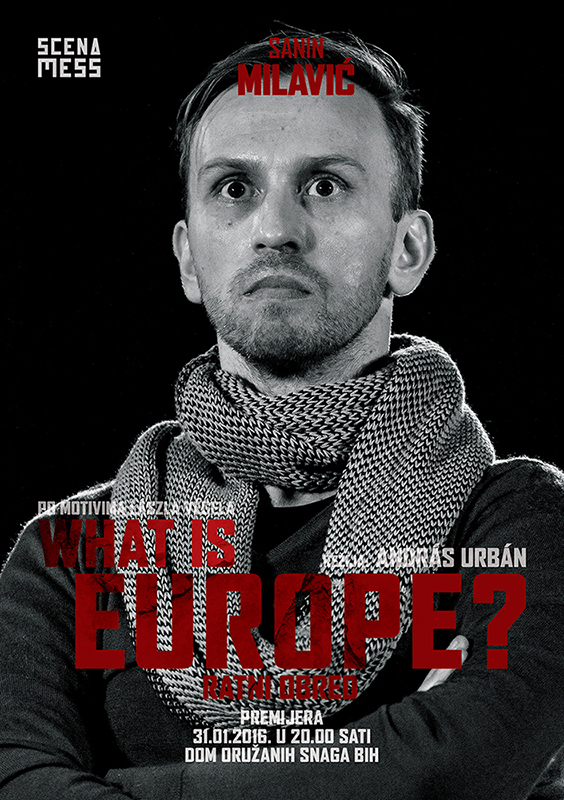 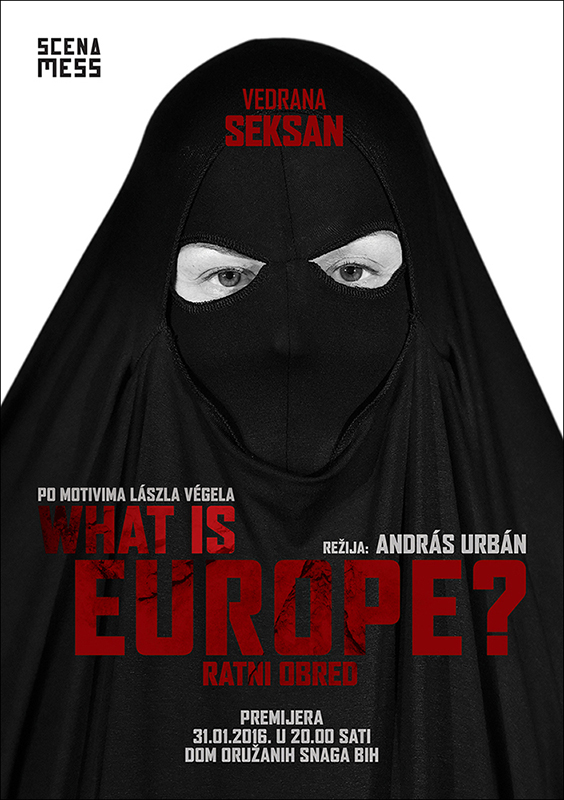 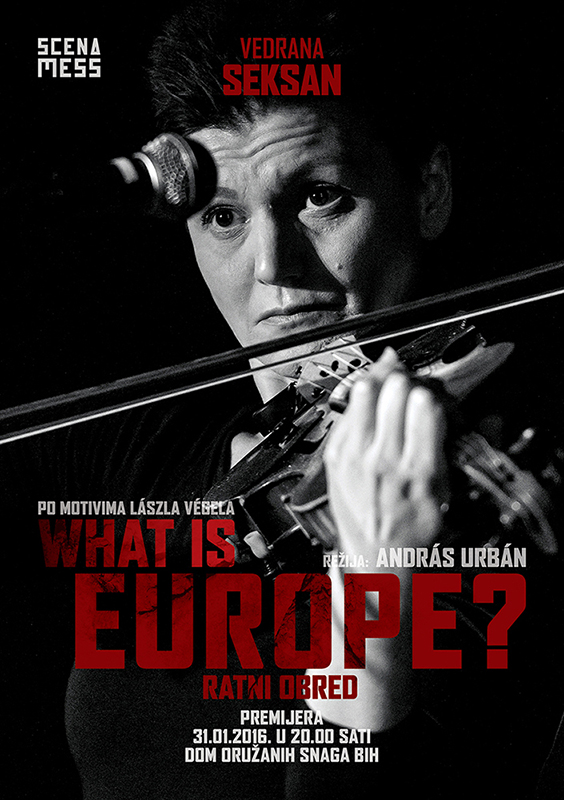 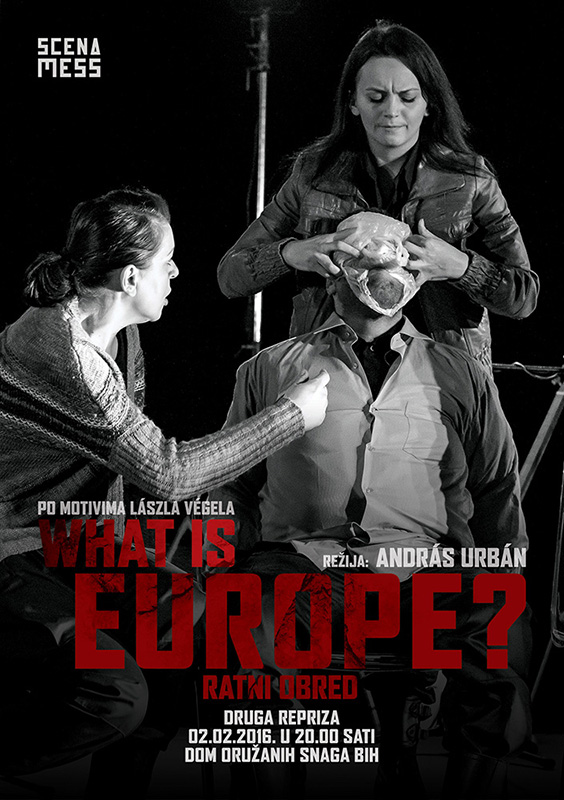 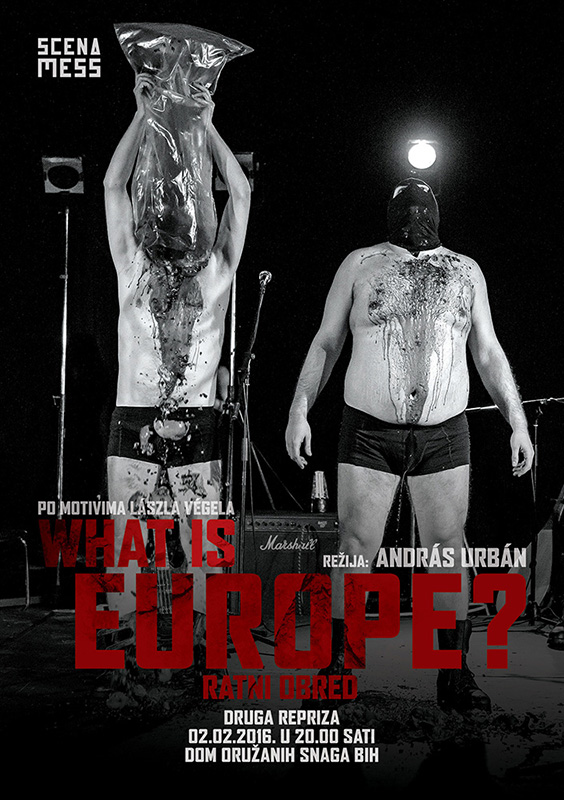 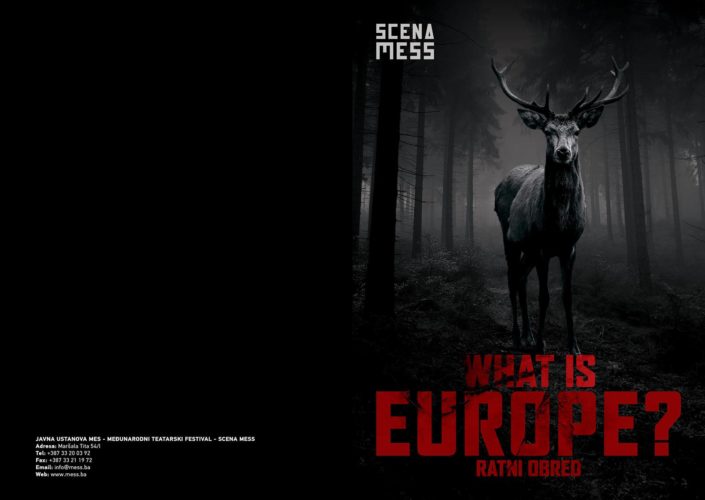 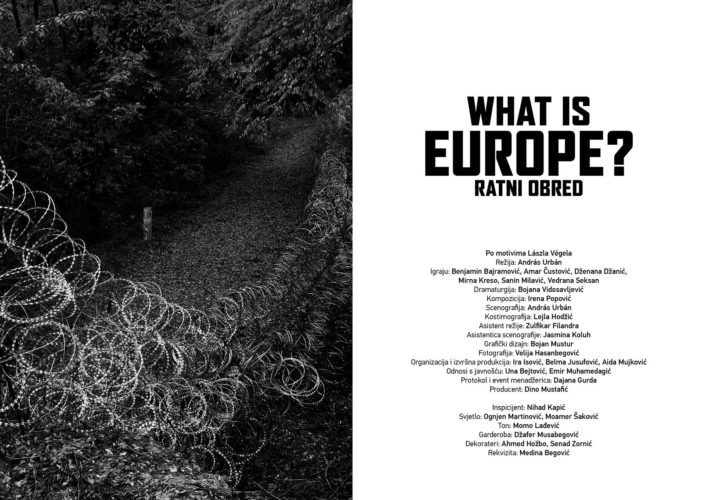 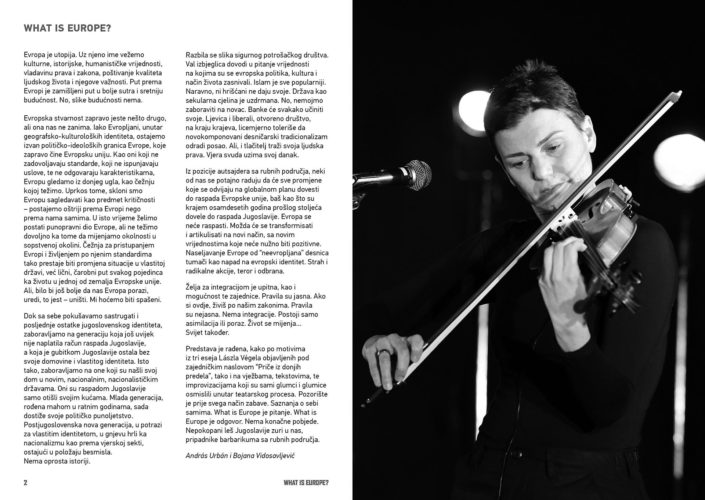 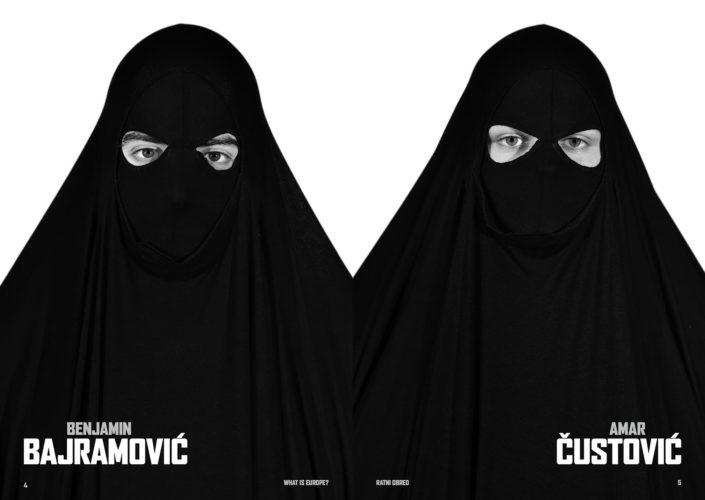 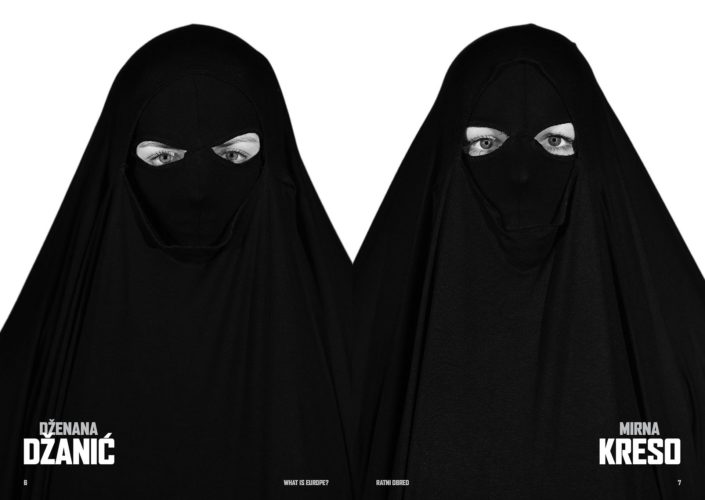 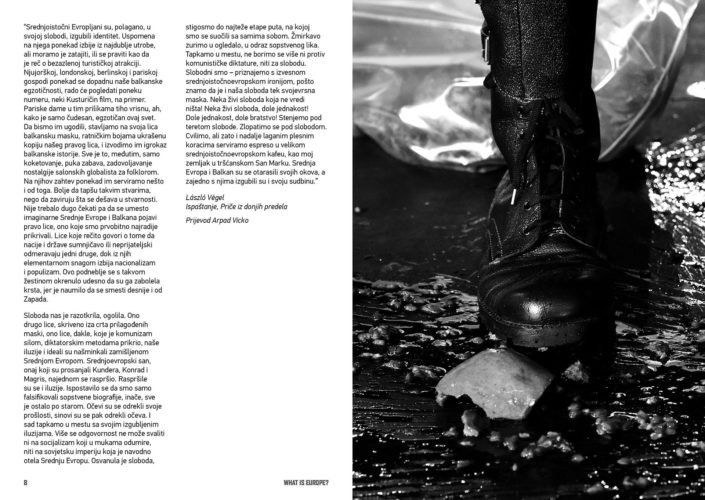 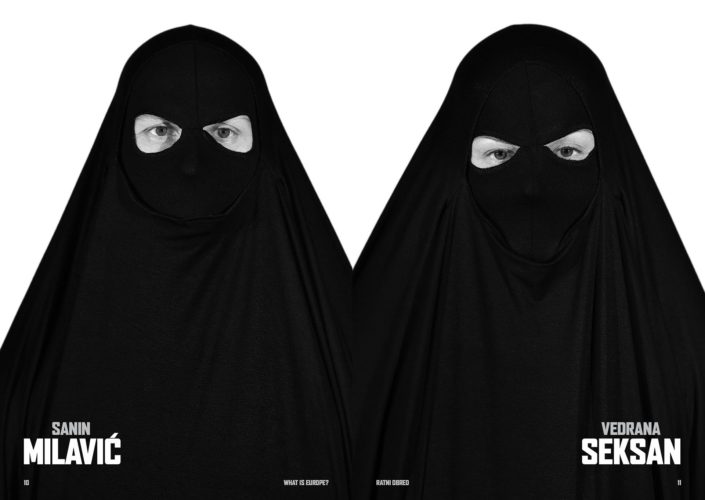 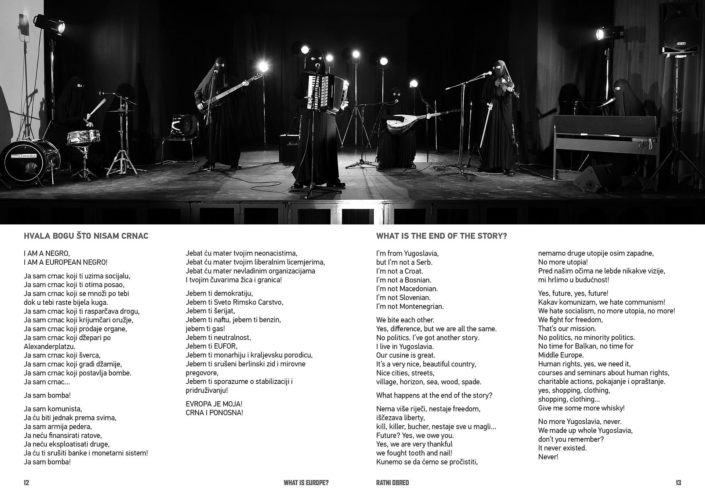 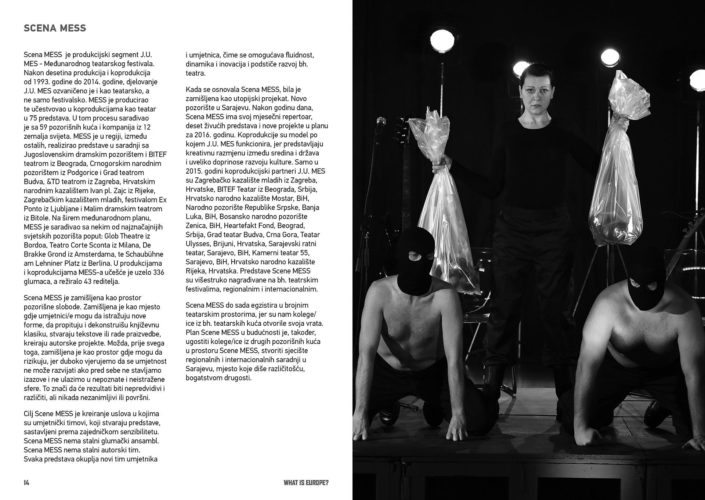 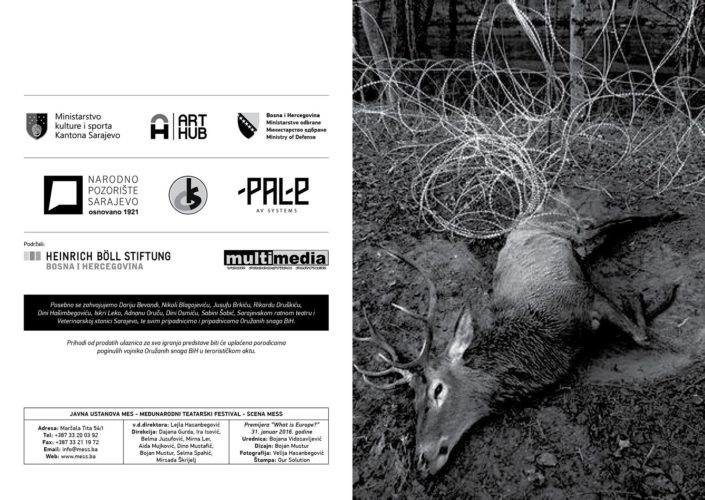 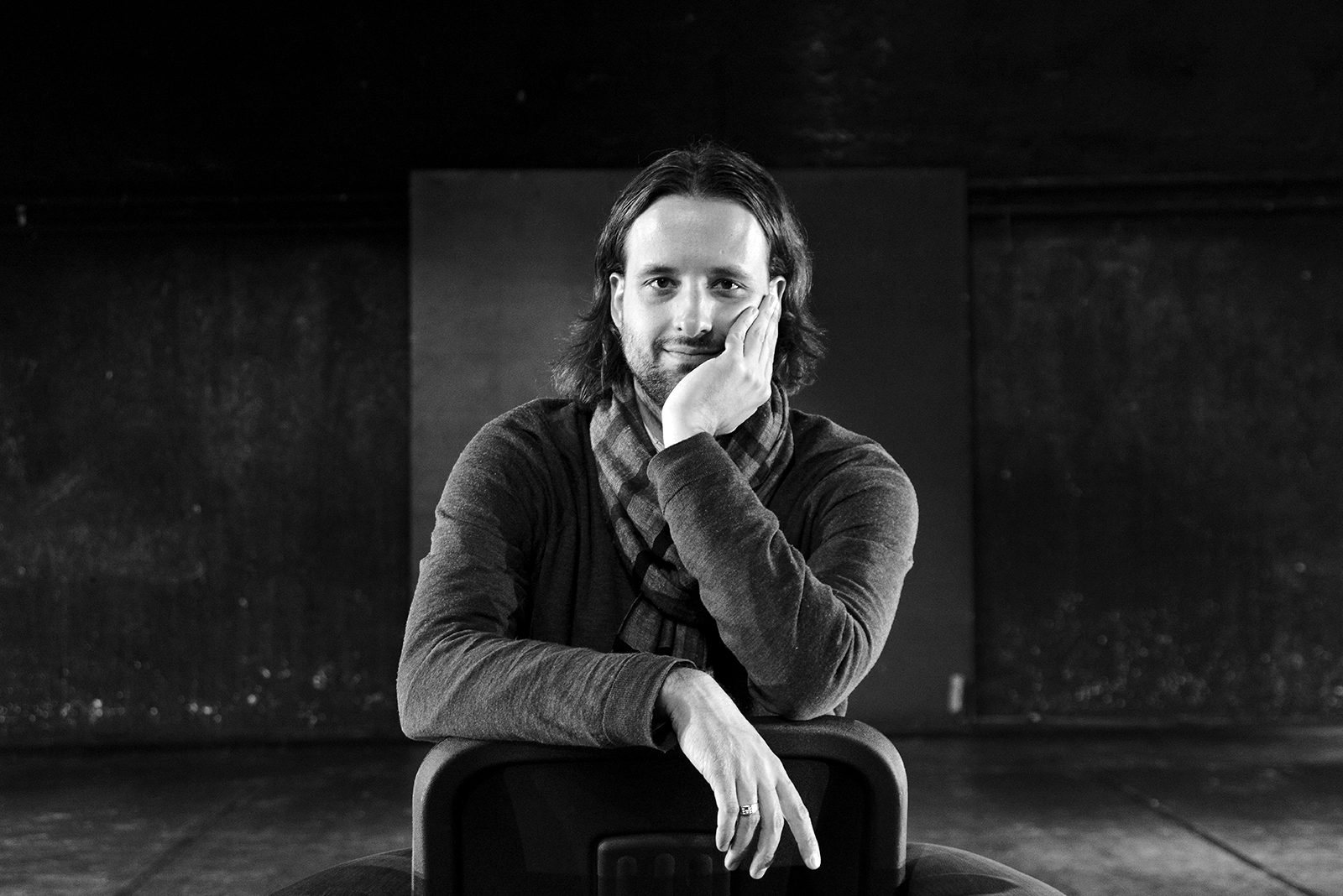 Creative Director / Graphic Design Professional / Photographer
Bojan Mustur completed BA and MA in digital / virtual scenography for theater, film and television at the Academy of Fine Arts in Sarajevo at the Department of Product Design. From 2008, he has been a member of the Bosnia and Herzegovina Association of Fine Arts, Painters and Designers. Bojan has worked for more than six years in the Public Institution MES – International Theater Festival – MESS Scene, one of the most important and oldest theater festivals in South East Europe. In a role of a photographer, graphic, web and video designer, Bojan worked on more than 30 theater productions. He also participated in the implementation of several documentary films, and closely cooperated with many TV houses in Bosnia and Herzegovina. As a digital / virtual designer, he was a part of numerous TV series for children. Bojan also worked with almost all UN agencies, such as UNICEF, UNDP, UN Women, the International Organization for Migration, and USAID. He presented works in over 40 cities worldwide. Also, Bojan is contributor of Getty Images, Shutter Stock, iStock, Adobe Stock, 500px, ViewBug. Articles and photos inspired with sports, arts and films published in numerous magazines, newspapers, web pages such as: National Geographic, Al Jazeera Balkans, Sarajevo Times, TimeOut Doha, Qatar Calendar, State of Doha, Oslobođenje, Avaz, BH Dani, klix.ba, radiosarajevo.ba, source.ba, fotografija.ba, vecernji.hr, xxzmagazin.com, vaterpolovesti.com, dance.hr, etc. More about his design works on www.bojanmustur.com. 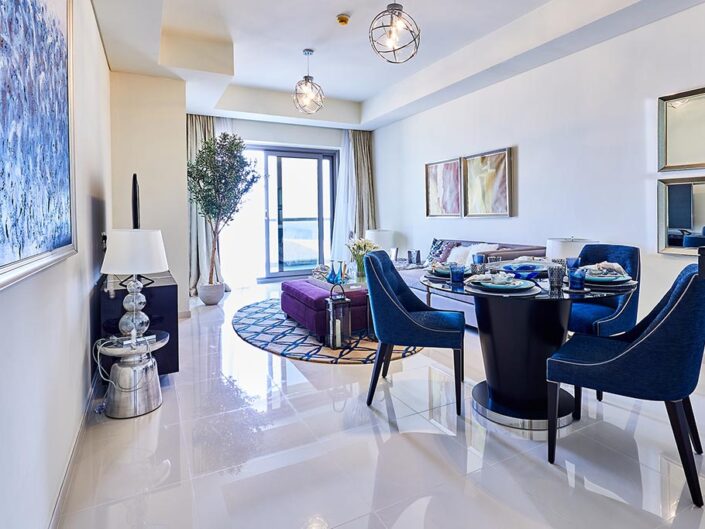 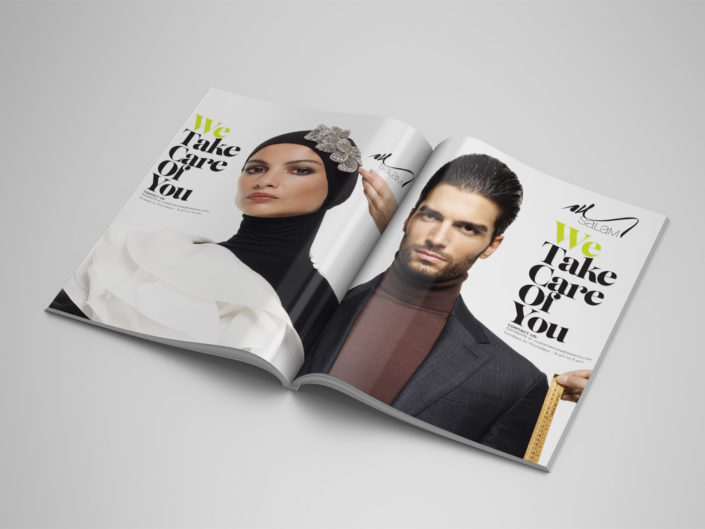 Oryx Magazine / We Take Care Of You 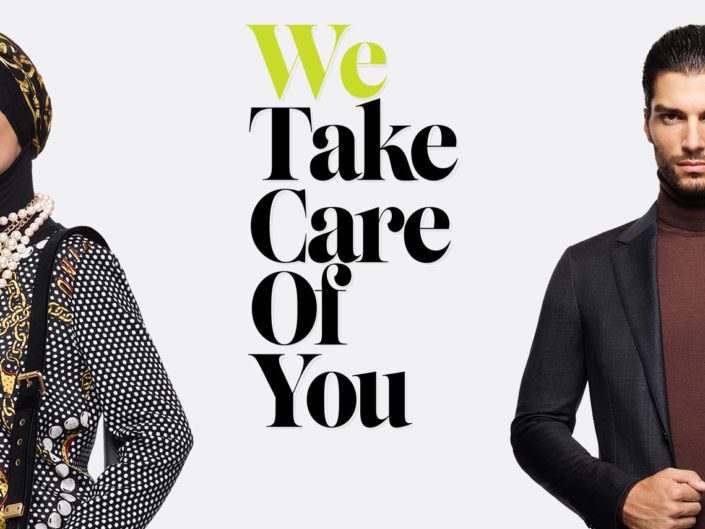 We Take Care Of You 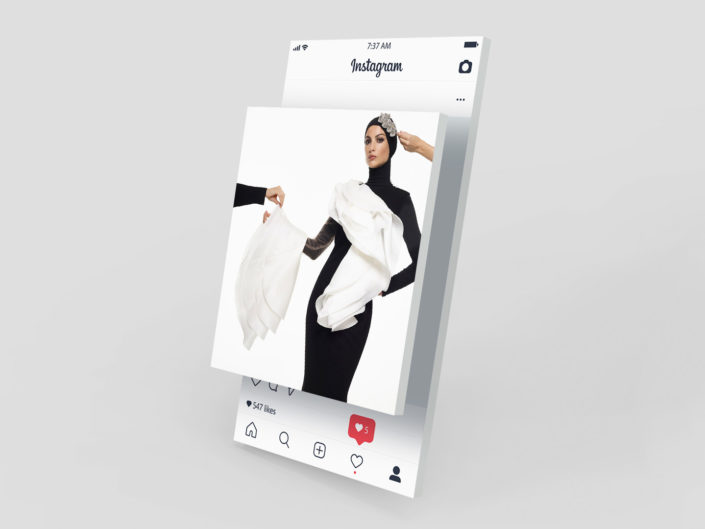